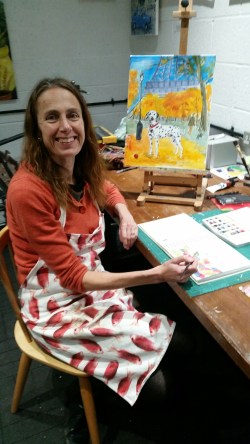 Well done to anyone on the blogging challenge who found this week’s blog!  Last week was my first attempt – a short story, which a few people read and commented on (thank you!) It was deliberately different to my usual posts because it was for 29th February, the ‘extra’ day and a chance to experiment with being someone different.

The next day was March 1st and my 50th birthday.  The official launch date of my fifty faces challenge. Of course, I had not been able to contain my excitement about this so I have already started painting them but this is my chance to be ‘Queen’ and have an official and unofficial birthday (or several).

The inspiration for 50 faces actually came from a year I spent as a beauty consultant for Mary Kay.  Although I don’t work for them any more I still think this is a lovely company to work for (and I still use their products)  The best aspect was the weekly training.  You get together in groups and set weekly/monthly/yearly targets and get rewards and lashings of praise when you achieve them.  I once won a badge for doing skin care sessions and make up for fifteen faces. It was a real challenge to me to pick up the phone and get appointments with people and then to spend an hour or so working on them.  However, I did it, I enjoyed it and I glowed with delight when I got my badge of honour. It is still on one of my dresses to remind me of that mini success.

For the last three years I have been working as a musician and painter.  I still keep in contact with the MK team, though, and wanted to honour them in a way by pinching their idea and setting myself the new challenge of PAINTING 50 faces in acrylic on canvas.  Same idea, well almost, but different medium. 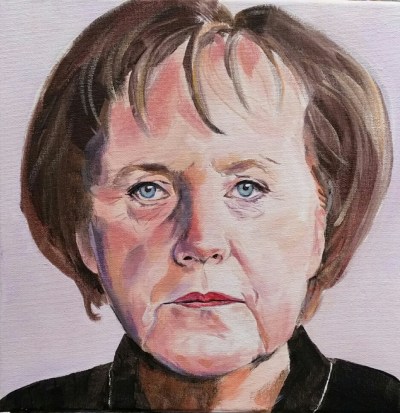 The first face I chose was Angela Merkel because I was impressed with her compassionate efforts to deal with the migrant situation.  I know she has lost popularity with the German voters but this huge problem has no easy solution and I admire her for the decisions she has made.  She was also quick to respond after the New Year attacks on women and seems to me to be a strong, fair and inspiring leader.

I read somewhere that Angela always wears the same cut and colour suits to discourage press commentary on her appearance that deflects from the issues she is working on. Often her face appears serious but occasionally she breaks into a warm, unaffected smile. 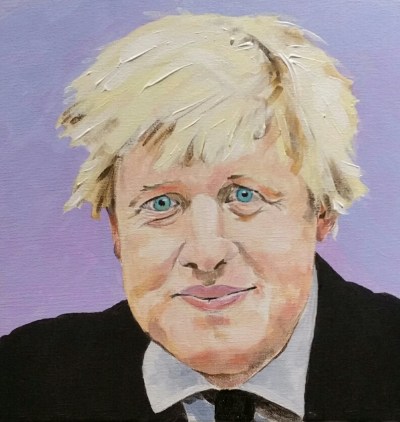 My second subject was Boris. Love him or hate him he is certainly intelligent and entertaining.  Just as I was working on him the nation were wondering which way he would vote on the Brexit issue.

Next came his rival and colleague,  PM David Cameron. 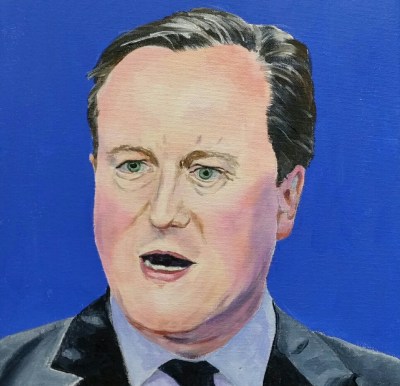 I was really worried about how I would capture his likeness.  After all, with Boris, as long as I popped a messy mop of blond hair on his head he was going to look pretty much like the Mayor of London but with Cameron it was harder.  He has no really obvious features.  He is fairly smooth and well kept with short brown hair and regular features. Challenging!  It may not be that obvious but I worked very hard on getting the likeness as accurate as possible and was very relieved when he was recognised by my friends on Facebook.

For my birthday I was given a copy of “I am Malala”. Well actually, more than one copy.  While researching her I had become really excited about her story and I was lucky enough to be blessed with people who know I like books and had heard me enthusing about this inspiring young advocate for educating girls. I actually have the teenage version AND the full version.  Both are good. 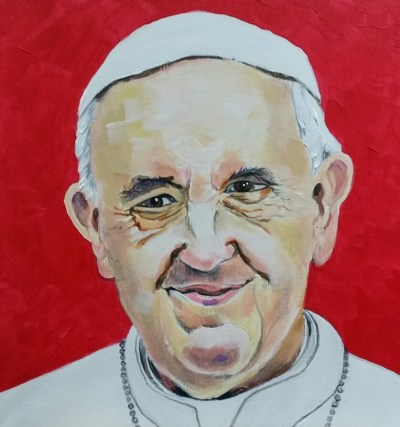 The portrait of the Pope has caused some hot debate amongst my friends.  Some think it the worst so far and others the best! He was chosen because I was impressed by him telling Donald Trump that someone who contemplates building a wall to keep out the Mexicans cannot be a Christian.  I thought he was bold speaking out like that and I hope it made Trump and his supporters think twice about their plans.  There was a bit of banter about this on the radio that made me laugh about whether or not someone could be a Christian if they erected a garden fence etc. but I think  a significant number of people appreciated the point Pope Francis was making.

Many people have shared their views on the people in the 50 faces series.  I really like this and I can see it is going to be one of those projects that evolves partly in response to comments and partly by what happens in the news.  I haven’t decided who the fifty people will be at this stage but I do want an even balance of genders and plenty of variety.  I am becoming conscious of the power I have to decide.  You feel a personal connection with someone you spend hours carefully painting so that afterwards it is as if you just spent a morning sharing coffee with them. I guess the question is – who would I like to have coffee with next?

Please do comment on the project, the individuals or the paintings.  Who else would you like to see included? Why?