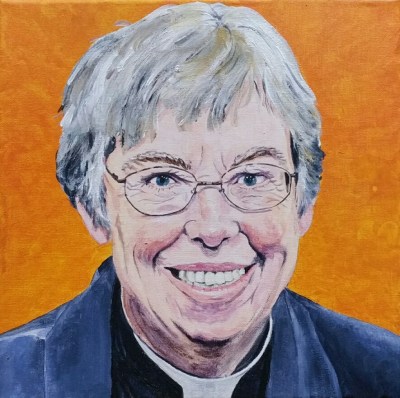 This is Angela Tilby, the Diocesan Canon at Christ Church, Oxford.

As it is Holy Week she seemed a perfect choice for my seventh face out of 50 in 2016.  Angela recently visited Harpsden Church where I work as organist and choir leader.  She was instantly likeable with a warm, lively personality and down to earth approach.

We listened agog to her sermon.  Prior to her ordination Angela spent 22 years as a producer within the BBC’s Religious Department and has made regular appearances on TV and Radio, including several broadcasts of “Thought for the Day”  We were not disappointed.

I later discovered she has written several books which have been well received.  “Son of God”, ISBN 978-0340786468 being described by the Birmingham Post as “rather too much speculation and not enough hard fact in Tilby’s account but still an engrossing read”. Surely that is about as much credit as you can expect writing on such a subject?

As an undergraduate studying English and Theology in the 1980s I toyed with the idea of ministry, which was as much as a  woman could do back in those dark ages before women could be ordained.  I remember the fears promulgated back then at the very idea. Things have changed!  Now there are many women priests and I have often played at services where all the principal roles were conducted by women and no one batted an eyelid.

At a service at St Paul’s recognising 10 years of women in the priesthood Angela Tilby was called upon to give the sermon and she stated, “Women priests have not unhinged the church”. Far from it.  Although it is true there are still some dissenters women priests have earned respect from men and women alike. Obviously I am biased but it seems to me that it has given a warmth and balance to relationships within the church. Anthony Howard, in an opinion piece in The Times stated that Tilby’s sermon at St Paul’s showed that she “is the equal of, if not superior to, most men currently sitting on the episcopal bench”.

Having said that though, the majority of Tilby’s focus does not seem to be on gender issues at all.  She is a pragmatic, warm hearted and intelligent human being doing a responsible and demanding job well in a Britain that no longer necessarily sees itself as a  “Christian” country. She is realistic about the demands made on parish priests by wistful parishioners and able to connect with the broader thinking public who may not see themselves as religious at all.

The Church of England still exists and for many in this country it provides much in the way of spiritual support and direction, loving fellowship and care for the sick and vulnerable.  However it is also under attack from critics and sceptics.  This dichotomy of being asked to provide more and more service and empathy to the community whilst simultaneously being on the receiving end of taunts and criticism must make this an extraordinarily challenging job in 2016.

I for one am very glad that there are still people taking up the call to ordination in the face of so many challenges and to those who criticise from outside – why not find out what it is like from within a church rather than making assumptions from outside? It might turn out to be more realistic, friendly, enlightened and in tune with the 21st century than you thought.