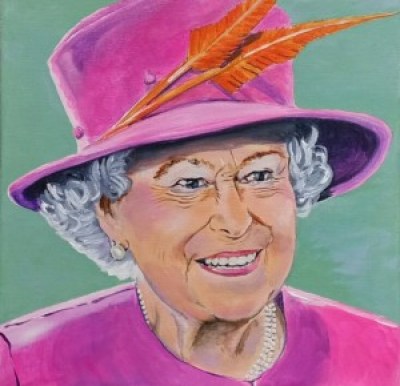 Several people last week suggested our Queen would be a good person to include in my 50 faces series for 2016.  So if you were one of those people, here is your answer!  I hope you like it. I opted for a look without crown and blue sash just to check you could recognise her without the trappings, but did choose a characteristically bright and cheerful colour as I know she likes to sport outfits that make it easier for people to spot her from a distance.  And let’s face it we all like to spot a celebrity, don’t we?

As always, painting set me pondering on the character beneath the  canvas.  The Queen has been in the news recently for refuting the claims made that she was in support of the Brexit campaign.  Interestingly she doesn’t often get annoyed about things in public but she vey quickly made her displeasure known when it was claimed she had expressed a political opinion.

Personally, I think you have to admire this monarch who is still working at the age of nearly 90, with no indication that she is about to quit.  Unlike royals of the past, she firmly refuses to be drawn on political issues, upholds the laws rather than creating them for her own ends and respects and supports the leadership of our democratically elected parliament.  Also, love her or hate her, she sees her role as one of service and responsibility to her nation (and in her case to God)  and has dedicated her life to this.

From her twenties this lady has led a large and remarkable life.  She has lived through war and peace, good family times and bad.  She has had her privacy raked over and every aspect of her life discussed and written about.  She has been honoured, disparaged and ridiculed but always carries on, one day at a time, welcoming, making speeches, offering hospitality and patronage.

My favourite story of her is that when she had the king of Saudi Arabia as a guest she made no political comment on his country’s treatment of women.  However, knowing that in Saudi Arabia it is against the law to drive, she elected to take him on a tour of her grounds by land rover.  Guess who was at the wheel?  I can tell you this, it wasn’t the king and it wasn’t a chauffeur!

A friend of mine is currently completing a book about conversations people have had with the queen. This has led her on a fascinating journey of discovery as she interviews people both in the public eye and  out of it to find what gems they remember from their encounters with the owner of the crown jewels.  Here’s an article about her, together with contact details, if you have any stories to share: ‘What the Queen said to me…’

Sadly, despite being invited along to two royal garden parties (along with several thousand other guests both times) and seeing her from a distance in a swiftly moving coach when I was a child and had my sightline obscured by umbrellas and and handbags I have never actually shaken the royal glove, stroked a corgi or exchanged comments about the weather with the royal lady.

How do you feel about the role of the queen and the position of the royal family in this day and age?  Would you prefer to get rid of it as an outdated institution?  Do you resent the amount of wealth held by the crown?  Or do you see our Queen as a role model? Or maybe as a living soap star?  Do you love to follow every detail of the royal family life or does the mention of another royal wedding bore you silly?   Whatever your view, how does the existence of the royals affect us as a nation in 2016?  Who would be out of a business or missing out on fun, cakes, bunting and pageantry without them this summer as we look forward (or dread) the coming 90th birthday celebrations?

I think you can tell my leanings. I might have a few misgivings occasionally but when it comes to another royal milestone I just love a good royal birthday party.  Long live the Queen!

OK…who next for the collection?  Any more suggestions?