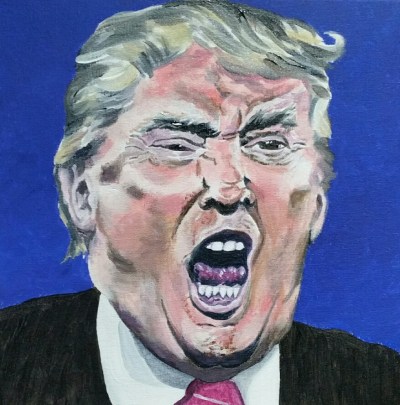 I expected this portrait to raise a few hackles and when I put it up on Facebook sure enough the comments came rolling in. He definitely gets people stirred up.

As an artist it was important to me to face up to this controversial figure and do a portrait with impact.  However, it left an uncomfortable feeling in the pit of my stomach and whereas often I like to return to my images after I have done them, with this one I cannot bear to let my gaze rest on it.  I didn’t ignore you, Donald, but I did think you were the ideal person to be number 13 out of my 50 significant faces.

Who is going to win the presidential race in America?  With Brexit announced today we now face a prospect of a new President and a new UK PM by the end of the year. Big changes and great opportunities for anyone in the media and broadcasting.