I have just been reminded that it has been a while since I last published a blog!  Where has the time gone?!

Well, alongside a busy term of teaching and a series of trips over the summer I have been busy in the studio and today finished the 25th portrait in my series of 50.

Here is a quick view of the latest faces… 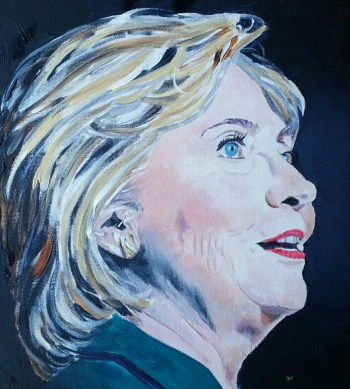 Here’s Hilary. Love her or loathe her she is the best chance America has of keeping Donald Trump out of the Oval Office.  Just as I thought this was going to be the next political highlight we were rocked at home in the UK by the Referendum result.  Suddenly the Britain we knew had decided to change its relationship to the world and our PM had resigned.

I was excited by the leadership race between Angela Leadsom and Theresa May.  At first I only knew them from listening to the radio so I didn’t even know what they looked like and had to Google them frantically.  I painted Angela one week, intending to do Theresa the following week and anticipating the struggle between them to drag on for the next six weeks. 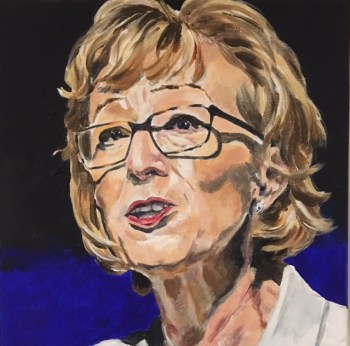 However… before I had even got Theresa May’s portrait completed she was no longer a candidate but actually PM!  I must confess to a gnashing of teeth when I realised too late I had portrayed her with an old haircut not her newer, shorter one. 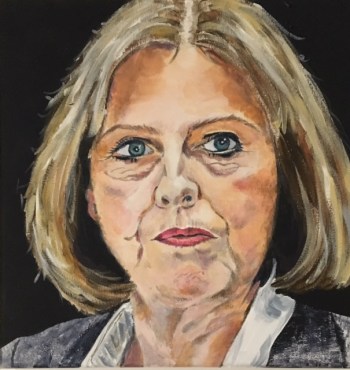 Of course, the political turbulence at home was far from over as more fighting broke out this time amid the Labour leadership.  This time I painted Jeremy Corbyn quickly thinking that if I took too long Labour, too, might have been updated its figurehead but…no…he’s still hanging in there. 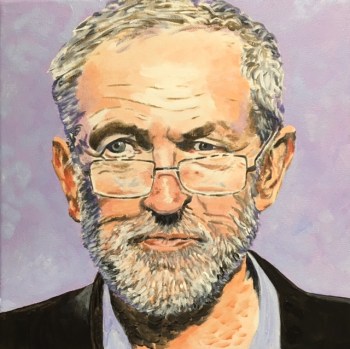 It was a bit of a relief when Parliament broke up for the summer and we could start thinking about other things.  Along came Wimbledon and an opportunity to celebrate the talents of the Williams sisters among others.  Here’s Serena 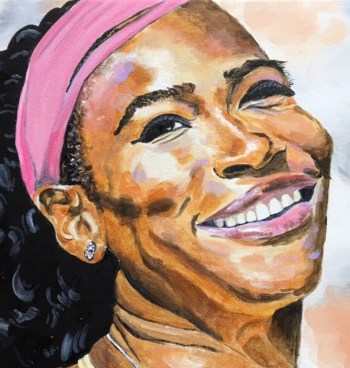 And then – joy! – we had the Olympics in Rio. I celebrated our first gold medal of the 2016 games by painting the man who gained it.  Swimmer Adam Peaty: 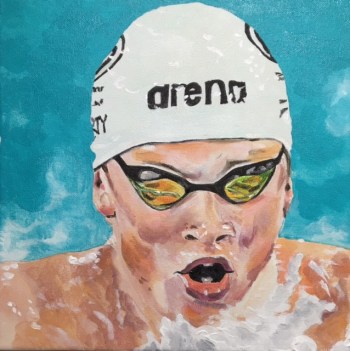 I’d always wanted to do a swimming pool picture.  Probably since being taken to a Hockney exhibition as a young girl and loving all those turquoise paintings with wobbly reflections in them.

And speaking of exhibitions, the school holidays freed me up to visit Tate Modern for the excellent retrospective of the life and works of Georgia O’Keeffe. 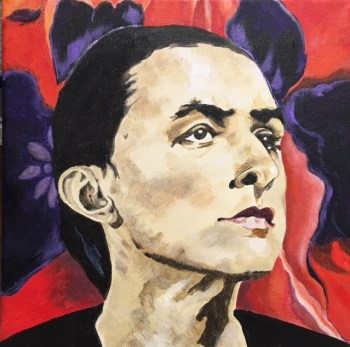 I was inspired here to update the black and white photos  of her taken by her husband by doing colour paintings and putting her against a background of her famous poppies.  I am a bit annoyed that in doing so I inadvertently gave her Mickey Mouse ear appendages but hey maybe that’s her American heritage coming out.

Followers of my 50 faces may be wondering why I painted Georgia as I stated that I wanted to only include people who were alive this year.  That would be a very good question and it is a rule I broke consciously and for a reason.  I loved the whole exhibition – her strong personality still seemed to linger in her enormous, vivid landscapes, powerful pictures of bones, giant flowers and landscapes and in the photos and stories that filled in the details of her life.  When I had finished wandering round (very slowly, with utter fascination) I felt as if her life force was still burning inside me and inside the thousands of other visitors flocking to the site, still inspiring and challenging us.  I couldn’t wait to get home and start work on her portrait.  So, if you like, I decided that in this sense she was affecting me and others in 2016 as if she were still alive.  The exhibition continues till October so there’s still time to see what I mean. 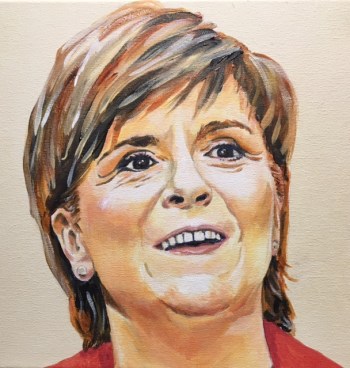 Parliament resumes…the Brexit debate is back to the fore and Nicola Sturgeon is threatening to take Scotland back to the ballot box again over the issue of independence.  Everyone is asking OK,  Brexit means Brexit but what does Brexit actually mean? 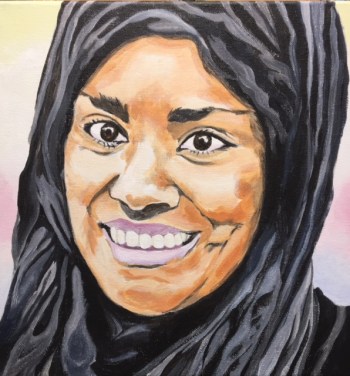 Happily, there is more to life than politics.  There is cake! And there is Bake Off.  As the BBC ramped up the anticipation of the new series I listened to a great interview with Nadiya Hussein, winner of the last series. I loved the scenes of her joy and disbelief as she heard she had won and the pride in her husband’s eyes as he saw her achieve success and fame in her own right.  In the interview she simply stated that her success had come out of her role as a wife and mum, and that’s where she is going to continue putting all her focus and energy.  Her excitement and enthusiasm are breathtaking.

The 25th face and my halfway marker is probably not one many recognise by sight but millions know by her voice. 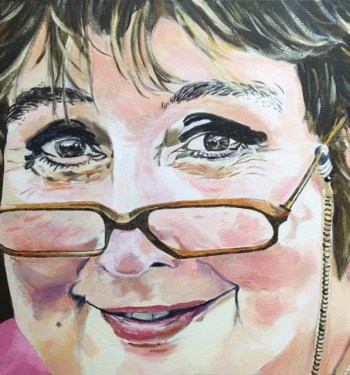 Jenni Murray, along with the other presenters of Woman’s Hour has kept me company for many, many hours of painting in my studio.  I enjoyed painting this one in an intimate closeup.

So that’s half way.  Far from tiring of this project I enjoy it increasingly. It is making the year intensely interesting for me as I follow the daily events unfurling and think about who to choose next and why.  So far all the canvases have been 30×30 cm squares, as planned.  However, from here on I may vary this and introduce some surprises.

The other exciting news is the exhibition venue is now booked! The 50 Faces interactive exhibition will be on show at The Old Fire Station Gallery in Henley-on-Thames, from 7th to the 14th June.  Watch this space for more previews, comments and information.